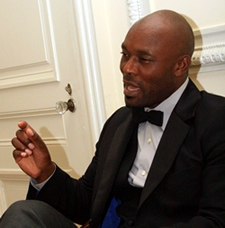 With more than 120 guests gathered at the Embassy of Haiti to watch a screening of the French film “Toussaint L’Ouverture,” Ambassador Paul Altidor spoke privately in his office with the film’s star Jimmy Jean-Louis.

“We are trying to reshape the image of Haiti and we’re relying on the existing talent, art and culture of Haiti,” Altidor told the actor. “People don’t realize how much talent and history Haiti has. We’re relying on people like you to sell a different Haiti.”

Jean-Louis, a Haitian former model well known for his role as The Haitian on the television series “Heroes,” agreed with the Ambassador and offered to lend his celebrity to assist. “What can I do to move this forward?” Jean-Louis asked.

The two met on Sunday evening, Nov. 18, 2012 at the Embassy before Jean-Louis answered questions about the film and joined guests at a reception to commemorate the Bataille de Vertieres.

Knowing the vivid history of Haiti can help mold a more positive image of the country, Jean-Louis said as he told a story that occurred after a screening of the film in France. An elementary student there saw the film and the next day he played with friends. One friend pretended to be Batman, another Superman. The one who saw the movie proclaimed, “I’m Toussaint L’Ouverture!” An example, Jean-Louis said, of how one small thing can change perception. “It’s a story that needs to be heard by all.”

“Haitians are hard workers,” said Jean-Louis, who told the crowd later that he visits Haiti once or twice each year. “We want to change the ‘hand out’ mentality. Haitians want jobs.”

Jean-Louis also said he wants to visit the Embassy again, since the event gained so much attention. “The Ambassador is going in a good direction. He represents the youth and has new ideas. You can tell he has an open mind,” said Jean-Louis, who founded Hollywood Unites for Haiti in 2008. “I’d like to work and collaborate with the Embassy as much as possible.”

“Haiti is one of the greatest countries in the world,” said Jean-Louis, who has lived in several countries including France, Italy, South Africa and the U.S.