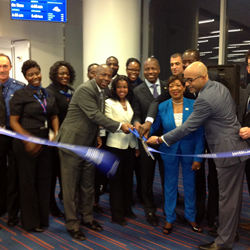 The first outgoing flight departed at 6:30am from NYC with a full load of passengers and was welcomed by Haiti’s Minister of Tourism, Stéphanie Balmir Villedrouin, and other officials. On board was a special delegation including: Members of JetBlue, Ambassador of Haiti to the U.S., Paul Altidor, Counsel General of Haiti in New York, Charles Forbin and many more.