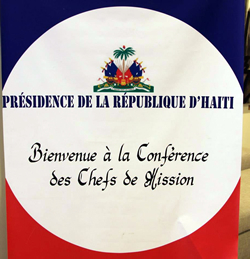 Ambassador Paul Altidor and the entire Haitian Diplomatic Corps from around the globe met for a summit in Port-au-Prince. The conference, which ran Dec. 19 through 22, was initiated by Haiti’s President Michel Martelly and organized through the Ministry of Foreign Affairs. In addition to the diplomats, the event was also attended by President Martelly, Prime Minister Laurent Lamothe and Foreign Minister Pierre-Richard Casimir.

The conference included briefings from Haiti’s ministries, which provided updates on various initiatives and programs related to Haiti’s development agenda.

“The role of the diplomatic corps is to advance the country’s agenda around the globe,” said Ambassador Altidor. “The diplomatic retreat was designed for us to discuss strategy, while outlining plans to move Haiti forward. It provided an excellent opportunity for diplomats to enhance synergies and meet with the highest levels of the Haitian government.”

This meeting, held at the recently-inaugurated Oasis Hotel, is the first such meeting of the entire diplomatic corps in 12 years.