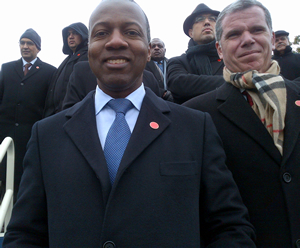 WASHINGTON, D.C. (January 21, 2013)—As U.S. President Barack Obama took the oath of office for his second term, Haiti’s Ambassador to the United States, Paul G. Altidor, served as the Government of Haiti’s only official representative in attendance.

“It is an honor to represent the Republic of Haiti, Haiti’s President Michel Martelly and the people of Haiti,” said Ambassador Altidor. “We congratulate President Obama on his inauguration and send him our best wishes for the next four years.”

“Haiti and the United States have a strong relationship and a long history. We look forward to continuing strengthen that relationship,” Ambassador Altidor said. “It is important that there is a Haitian government representative here in Washington to witness this historic moment and support our partner, the United States.”

On the eve of inauguration, Ambassador Altidor opened his official residence for an event hosted by Haitian Americans for Progress. More than 100 people attended the event, including Haitian-American elected officials, members of U.S. President Obama’s campaign staff, visitors from around the country and guests from Haiti. It was the first official event at the Ambassador’s residence since its renovation and the installation of an exhibit showcasing prominent Haitian artwork.