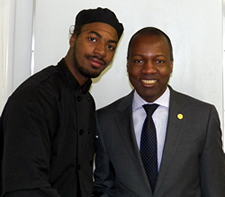 Although it may have looked like a tasting tour, filled with ice cream and treats, Ambassador Paul G. Altidor’s trip to Baltimore Thursday, March 21, was an international business diplomacy mission. By taking a 45 minute drive to Baltimore, Altidor highlighted, encouraged and strengthened bonds between entrepreneurs and farmers in Haiti and entrepreneurs in Baltimore. By connecting entrepreneurs, Altidor said jobs are created, the economy is strengthened and both countries benefit.

The Ambassador visited Taharka Brothers, the Baltimore-based, ice cream maker, and he also toured and ate lunch at Milk & Honey Market. Taharka Brothers invited the Ambassador to its factory to see how its ice cream is made and to sample some of the flavors which incorporate chocolate, vanilla, salt and coffee grown in Haiti. Milk & Honey also uses chocolate from Haiti in its cookies and other treats.

“Delicious,” Ambassador Altidor said about the Taharka Brothers Haitian Chocolate. “The quality and the rich flavor made me feel right at home.”

More important than the ice cream tasting was the international connection, strengthened by the Ambassador’s first visit to “Charm City.”

“I’m honored to have been invited,” he said. “I’m encouraged by the entrepreneurial spirit of these young people in Baltimore, who have formed alliances with farmers in Haiti. They realize we are all connected. To truly participate in the transformation in Haiti and in their own community, they understand that building business alliances is the right avenue. By doing so, they are putting people to work in their own neighborhoods, which bolsters their local economy and boosts Haiti’s economy 1,400 miles away. In today’s global marketplace, the owners at Taharka Brothers realize that they can do more for a Haitian farmer, his family and community by buying a $200 bag of chocolate from them than by donating $2,000. Jobs equal progress and that is the future of Haiti. The gift that keeps on giving is a job.”

Owned by young, African-American men under age 24, Taharka Brothers has 12 employees and distributes its ice cream to 80 shops from Philadelphia to Virginia. Taharka Brothers’ Darius Wilmore, a former Def Jam Records art director, agreed. “There’s no dignity in charity,” Wilmore said. “Charity may help in the short term, but in the long term, it is hurtful.” The company reached out to Haitian farmers as a way to partner with businesses in Haiti, the country that first ended slavery in the Western Hemisphere.

With the tagline: ice cream with a purpose, Taharka Brothers calls its activism “The Big Payback,” a tribute to what Wilmore said is the debt every American owes to Haiti, because the nation changed the course of French colonialism by mounting its successful slave revolt. Taharka Brothers’ mission to pay back that debt to Haiti and to educate the next generation led them to conclude the Ambassador’s visit at a high school, Baltimore City College, the third oldest public high school in the country. There the Ambassador and Taharka Brothers’ executives spoke with students from the International Club, the International Baccalaureate program’s History of the Americas class and French students. The assembly was joined by the school’s principal, Cindy Harcum, along with Baltimore City Council Members Nick Mosby and Brandon Scott.

Speaking to the group, Ambassador Altidor told of a warning he received before he made his way to Baltimore. “You’re going to Baltimore? Be careful,” someone told him. “You see, the only image some people have of Baltimore is what they see on The Wire,” said Ambassador Altidor, referencing the critically-acclaimed television series that depicted a city replete with drug use, drug-related murders and dysfunctional schools. “Haiti suffers from that same issue. Perception takes over reality. People don’t know that Haiti, like Baltimore, is much more than you see on television. Haiti is a country with a long and rich history, a vibrant art scene and hard-working entrepreneurs. Supporting local businesses that collaborate with Haitian entrepreneurs on the ground does more to support the people of Haiti than a food or clothing drive.”