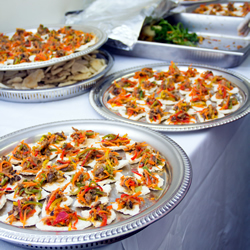 If the way to a person’s heart is through their stomach, the Embassy of Haiti reached many hearts Sunday evening May 19, 2013 as it celebrated its Flag Day with a food tasting event. Chef Stephan Durand and Pastry Chef Valery Abraham traveled from Haiti to prepare authentic dishes which included the staple soup joumou and the tangy soursop ice cream.

Many people aren’t exposed to Haitian delicacies and its culture,” said Paul G. Altidor, Haiti’s ambassador to the United States. “We hosted this showcase of Haitian entrees, appetizers and sweets not only to have a party, but to share the essence of our culture. We opened the doors to the Embassy to offer a sampling of Haiti, as a way to open a dialogue about our country, the opportunities there, the diversity there and, yes, the tasty food.”

On hand were almost 200 of Ambassador Altidor’s special invited guests, plus a few lucky members of the public chosen from more than 300 who registered online. The Embassy food affair promised guests a peek into the soul of the Caribbean country through a culinary excursion. It did not disappoint. With tropical flowers and fruits adorning the tables, one station offered guinea hen in cashew sauce with the Haitian national rice, which is served with red beans. Appetizers included breadfruit and codfish croquettes, marinated conch and marinated shredded smoked herring on cassava bread. Guests lingered near the dessert tables, which featured numerous mini pastries such as coconut pie, sweet potato pudding and bread pudding. Lively music played in the background as Ambassador Altidor greeted guests at the door. Visitors alsoenjoyed Haitian tea and coffee, along with a signature rum sour made by Celebrity Chef José Andrés.

Washington Redskins wide receiver Pierre Garcon said all of the dishes he sampled were delicious. “It was a great event. I came to support the Embassy and the Haitian people” he said, noting that living in a city without Haitian restaurants, he longed for authentic Haitian food. “Haitian food is missing in this area.”

Corinne McIntosh-Douglas, who visited the Embassy for the first time, said she enjoyed every minute of the tasting. “First of all, the art is absolutely fabulous,” she said, referring to metal works and paintings on loan from the private collection of Fritz and Gladys Racine, longstanding Haitian art collectors. “The décor is quite appealing and the food is divine.”

Other guests who attended the event included former White House Political Director and current U.S. Ambassador to South Africa nominee, Patrick Gaspard. Also in attendance was USAID Administrator, Dr. Rajiv Shah along with his wife. A number of Ambassadors, members of the Washington press corps, the business community and the art world were also present at the event.

In Haiti, Flag Day is a holiday that generates large celebrations. In that tradition, the Embassy hosted multiple events to commemorate the day beginning on the official Flag Day, May 18, with a children’s event. Haitian Creole lessons, dancers and face painting highlighted activities that also taught young people about the history of Haiti and how the nation fought for its independence. Ambassador Altidor greeted the children and their families, promising to host more youth-friendly functions.

That evening, author and historian Marcel Bonaparte Augustemade a presentation on the history of the flag, which was followed by a lively discussion.

The celebration continued as Chef Stephan Durand and Pastry Chef Valery Abraham prepared dishes for the World Bank Executive Dining Room and the Main Cafeteria May 22 and May 23. On Friday, May 24, Chef Stephan will work with the head chefs at one of José Andrés’ local restaurants, Jaleo where a Haitian dish will be featured on the menu Monday, May 27 through Friday, May 31.