Haitian Dishes Highlighted on the Menu at D.C.’s Jaleo through May 31 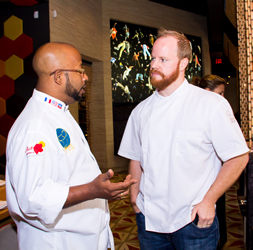 Well, the Embassy of Haiti brought in Chef Stephan Durand from Port-au-Prince, who worked with Jaleo’s head chef Paul Yeck, to prepare a Haitian special that will be featured on the menu through Friday, May 31.

The menu special is rack of lamb marinated with white Haitian Barbancourt Rhum, served with a sour orange salsa verde.

“Our goal is to showcase different facets of Haiti,” said Paul G. Altidor, who recently celebrated his first anniversary as Haiti’s ambassador to the United States. “If we can help people fall in love with Haitian food, Haitian art and Haitian history, we can build a deeper connection that can lead to people visiting Haiti as tourists and investing in Haiti as entrepreneurs. My goal is to introduce people to the Haiti that I know.”

The Haitian menu items caps off two weeks of cultural activities sponsored by the Embassy, which kicked off on Haiti’s Flag Day, May 18. The events included children’s activities and a Flag Day conference led by historian and author Michel Bonaparte Auguste. The Embassy also hosted a cocktail soiree featuring dishes by Chef Stephan along with Haitian Pastry Chef Valery Abraham, who also came in from Port-au-Prince. Chef José Andrés created a signature rum sour for the event which was attended by White House Political Director and current U.S. Ambassador to South Africa nominee, Patrick Gaspard; USAID Administrator, Dr. Rajiv Shah; Washington Redskins wide receiver Pierre Garcon as well as Ambassadors and members of the Washington press corps. The Haitian food tasting event was followed by the Haitian chefs preparing food for the World Bank Executive and Main Dining rooms.