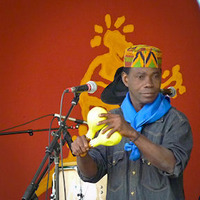 Washington, D.C.— Internationally-renowned Haitian troubadour performer Ti-Coca and his band Wanga-Nègès had the audience dancing in the aisle at the Kennedy Center’s Millennium Stage.

The group brought an hour of upbeat music, bird calls and trills to the U.S. capital city for free performance Tuesday Sept. 18 at 6 p.m.

Audience participation was almost mandatory at this lively performance which brought a mix of Haitian’s African-inspired Mereng with the styles contredanse and Konpa-direk. The audience gave a standing ovation after hearing an accordion, banjo, double bass and Ti-Coca himself, also known as David Mettelus, rock the stage. The band is named for the symbol of seduction, the hummingbird.

Troubadours, or “twoubadous,” are a popular Haitian tradition. Whether in high-end dinner clubs or at informal parties in small towns, their job is to coax the people to dance, while the band, using whatever instruments it can find, provides the soundtrack. Ti-Coca described it this way in a recent interview: “Anything can be an instrument.”

“It’s about friends gathering and playing, getting together to have fun and express their lives and feelings.”

The performance was part of Center Stage, which brings dancers, musicians and theater artists from Haiti, Pakistan, and Indonesia to tour throughout the United States in 2012. Ti-Coca and Wanga-Nègès will tour September and October with performances in Albuquerque, N.M., three stops in Iowa along with the Richmond Folk Festival in Virginia in mid-October. Center Stage is a pilot program created by the U.S. Department of State’s Bureau of Educational and Cultural Affairs in partnership with the New England Foundation for the Arts.

If you missed it, watch the full performance here: http://www.kennedy-center.org/explorer/videos/?id=M5165