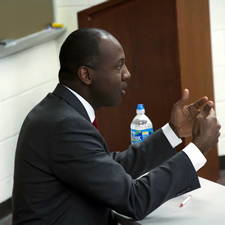 Business students at Howard University peppered Haiti’s Ambassador Paul Altidor with questions about investing in Haiti’s growth. On Tuesday, April 9, 2013, Ambassador Altidor spoke to a class of graduate students and then an auditorium full of freshman orientation students at Howard’s School of Business.

“Often when people think of Haiti, they think of charity and the earthquake,” Ambassador Altidor told the graduate students. “I want to rebrand Haiti and put ‘investment opportunity’ and ‘Haiti’ in the same sentence.”

Ambassador Altidor said he chose to speak with business students because, entrepreneurship and business opportunities will build wealth and create social and economic mobility. “The country has moved beyond the humanitarian assistance mode to identifying key sectors in the economy that can create jobs and growth. This is a frontier economy. By 2030, the goal is to have Haiti transform into one of the world’s emerging markets.”

When asked to identify the advantages to investing in Haiti compared to other countries, the Ambassador quickly reminded the class that Haiti lies just 600 miles from the U.S. and has labor costs that rival countries halfway across the globe. “Proximity is a key attribute,” Ambassador Altidor said. “There are also incentives available for U.S. companies to do business in Haiti. Opportunities abound in many areas.”

“Two years ago, it may have taken several hundred days for an entrepreneur to register a business in Haiti. Now that time has been shortened dramatically and we’re trying to get it down to 10 days. The next step is then making the process something that you can do in less than two hours online,” Ambassador Altidor said.

The tourism sector is one of the areas in which Haiti is seeking more growth. “We have some of the most pristine beaches in the hemisphere. Unfortunately, people don’t think of it as a tourist destination, but that is changing.”

The Ambassador encouraged the students to first visit the Embassy, and to learn more about the country and the business climate. He also asked them to join his campaign to inform people about Haiti’s positive attributes. “If you listen to many reports, Haiti only has poverty and gloom,” he said. “Many people don’t know Haiti’s history as the first independent Black republic in this part of the world. They also aren’t aware that we have a growing telecom sector and a vibrant art scene. This is the Haiti we want to share with the world.”

Tashima Garner will receive her MBA in marketing in May and was most interested in the discussion about Haiti marketing different aspects of the country that others don’t know about.

Chancellor Gaffney, who will receive his MBA in accounting next month, said he found the Ambassador’s presentation “excellent.” “Much of what he said was news to me,” Gaffney said.