Investors Networked and Heard from Haiti Business Leaders at Roundtable 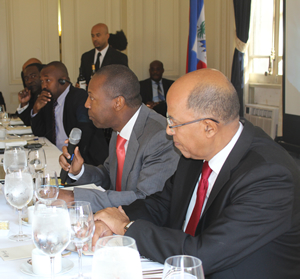 When dessert arrived at the Ambassador’s Business Roundtable luncheon, the crowd was pleasantly surprised to learn the source of the chocolate in the rich ice cream. A Baltimore company imported the chocolate from Haiti. The roundtable, which focused on “Doing Business in Haiti: Rules, Regulations and Realities,” highlighted a success story by featuring the ice cream made by the 4-year old firm, Taharka Bros.

Making meaningful connections and understanding the business landscape were the main topics discussed at the Wednesday, Dec. 5, 2012 gathering. A few dozen current and potential investors gathered at the Embassy of Haiti to learn from each other and hear from experts at the session. Some, like Taharka Bros. chief executive Devon Brown, came to learn how to grow their existing investment in Haiti.

“Before you set foot in Haiti,” said Ambassador Paul Altidor, “this forum will help you understand the climate, environment and what’s happening on the ground.”

Joining the Ambassador were noted businessmen Charles Clermont, president of S.P.I.D. project development and investment and vice president of SOFIHDES a private development finance institution, and Valèry Numa, long-time journalist, chief editor of Radio 2000 and owner of the newly-constructed Recul Hotel and Restaurant.

The roundtable was one in an ongoing series of business forums at the Embassy which encourage business investment by helping U.S. firms understand and navigate the business climate and culture in Haiti.

“Haiti is one of the best places to invest,” said Clermont, who also sits on the board of the electric company E-Power.

Money shouldn’t be an obstacle for entrepreneurs and investors seeking to work in Haiti. “Money isn’t the issue. If you structure the deal and bring the expertise or technology, we’ll find the money,” said Clermont, encouraging different types of businesses to consider Haiti. “Our goal is financial independence through a diversified economy.”

Clermont also told the roundtable that there are incentives available for various types of businesses including those in tourism, industrial, commercial and service industries. There is a misperception about operating businesses Haiti, he said, which he and others are trying to dispel. He described how his colleagues were able to secure international financing for E-Power and that the plant was completed, on time and on budget despite the 2010 earthquake.

The Haitian government is also working to make the country a more attractive business and investment destination, Clermont explained. Historically, it has taken 90 to 120 days to open a corporation in Haiti. The government is working to reduce that time dramatically to 10 days. “I can refer you to a good lawyer who can get you started right now in 30 to 40 days,” Clermont said.

Numa agreed. “There was a time when it took almost an eternity to open a business in Haiti. Now the goal is to get it to between two and 10 days.”

Numa told the group how he was able to build a modern, 24-room hotel in Camp-Perrin, which is about three hours from Port-au-Prince. The hotel features wireless internet, indoor parking, air conditioned rooms, a swimming pool and a full-service restaurant. When he markets his hotel, Numa promotes its proximity to waterfalls, beaches and the largest underground cave in South America.

For investors and entrepreneurs, Numa offered this advice:
1. Know how to identify the best opportunity.
2. Understand the timing of business opportunities. What might have been a strong investment 10 years ago, might not be a good bet today and vice versa.
3. Choose to resolve one or many problems. Focus on what challenges must be overcome for the business to flourish.
4. Identify local allies.
5. Try to accumulate your own resources.

Another theme of the event was networking and building connections between potential investors in the U.S. and aspiring entrepreneurs in Haiti, said Ambassador Altidor. “My ultimate goal is to offer the platform so folks can come together. We are about building bridges.”

Stephen Steinruck, regional sales director of the coffee roaster La Colombe, said he found the session “very encouraging.” La Colombe imports coffee from Haiti. “There is a demand for it. It is some of the best coffee in the world.”

“It’s no longer about charity,” Steinruck said about working with Haitian businesses. “It is about investment. It’s about opening up communications and making the linkages between U.S. and Haitian companies.” His company recently opened a school in Thiotte that offers equipment on loan and courses for farmers on increasing their yield and pricing.

Steinruck said roundtables and investment events such as the Ambassador’s series “make building those connections smoother.”

Brown, CEO of the ice cream maker, Tarharka Bros., said his company is now also importing coffee, cinnamon and sea salt from Haiti. “We now have 72,000 vanilla vines planted in Haiti,” said Brown, who communicates with the Haitian farmers by online videoconferencing. Brown hopes the connections he made at the roundtable will help his company import more ingredients from Haiti.