Official Visit of the President of the Republic of Haiti, Michel Joseph Martelly, to Washington, D.C. 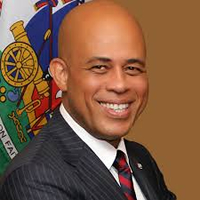 President Martelly accompanied by First Lady Sophia Martelly and members of his Cabinet arrived in Washington, D.C. on Tuesday, February 4, 2014. Members of the President’s delegation included: Mr. Pierre-Richard Casimir, Minister of Foreign Affairs; Mrs Ann Valerie Timothee, Chief of the President Cabinet; Mr. Wilson Laleau, Minister of Economy and Finance; Mrs Danielle Saint-Lot, Ambassador-at-large; Mrs Michele Frisch, Director of the National Pantheon Museum; and more than twenty members of the Haitian Press Corps. President Martelly and his Delegation were met at the Reagan National airport by Chief of Protocol for the U.S. State Department. On hand to welcome the President were Ambassador of Haiti to the U.S., Mr. Paul Altidor, and Ambassador Permanent Representative to the OAS (Organization of American States), Mr. Duly Brutus.

The President participated in a packed schedule of activities that included speaking with lawmakers on Capitol Hill; addressing the student body at Howard University; attending the annual National Prayer Breakfast; One-on-one official meeting with U.S. President Barack Obama at the White House and members of the Obama Administration Vice President Biden and Secretary of State Kerry; addressing members of the Organization of American States (OAS); Sit-down between President Martelly and some members of the U.S. media.

In addition the President, met with members of the Foreign Affairs Committee of the U.S. House, on Capitol Hill. The President of the Republic in particular discussed the economic development of Haiti and the international aid.

U.S. Secretary of State John Kerry met with President Martelly for a bilateral meeting at the State Department in Washington, D.C.

He invited Howard University to build additional education-based partnerships with Haiti. “Come and be part of the new and better Haiti that we’re building,” Martelly said.

President Obama welcomed Haitian President Martelly to the White House. The visit served as an opportunity for the Presidents to discuss how the United States can continue to support the Haitian government’s efforts to promote economic growth and strengthen Haiti’s democracy.

Dr. Johnnetta Cole, Director of the Smithsonian National African Art Museum and Ambassador of Haiti to the U.S., Mr. Paul Altidor, welcomed Haiti’s First Couple and Delegation to the celebration of Haiti’s 210th independence anniversary at the Smithsonian.

President Martelly recognized two Haitian-Americans, Marie Saint-Fleur and Rodney Leon. Marie Saint-Fleur is an attorney and former Massachusetts State Representative who broke down political barriers and forged the way for so many others. Rodney Leon is a distinguished architect who is designing a memorial at the United Nations headquarters in honor of the victims of the Atlantic slave trade.

In his remarks, President Martelly said “The Haitian Revolution and the Civil Rights Movement together remain models of inspiration, and imitation, for oppressed people around the world who deeply cherish the simple notion of universal freedom.”

To view pictures of the visit, please click here: