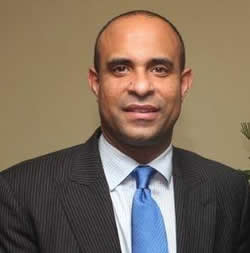 Washington, DC – Prime Minister Laurent Salvador Lamothe led a diplomatic mission in Washington, DC from July 23-24, 2012. The Prime Minister was joined by Ambassador Paul Altidor along with a delegation that included, among others, the President of the Haitian Senate Simon Dieuseul Desras, and the Minister of Finance and the Economy Marie-Carmelle Jean-Marie.

Secretary Clinton cited the Caracol Industrial Park as an example of the kind of initiatives being undertaken in joint collaboration between the United States and Haiti, which can bring about needed change. “In northern Haiti, the new Caracol Industrial Park is a landmark project that captures an integrated, sustainable approach to economic development,” said Secretary Clinton. “The park is drawing companies and will create more than 20,000 new jobs for Haitians… Construction is underway on a new settlement in the area with more than 1,200 homes designed to withstand hurricanes and earthquakes, each with electricity, potable water, and flush sanitation.” The delegation held meetings with the USAID Administrator Rajiv Shah to discuss USAID’s activities in Haiti including expanding the school feeding program and mobile banking.

During the mission, the delegation met with World Bank President Jim Yong Kim along with officials from the International Monetary Fund and the Organization of American States. While in Washington, DC, Prime Minister Lamothe noted the government’s efforts to shift away from an assistance model by increasing government revenues and attracting private sector investment. Aligned with this goal, the Prime Minister and Ambassador Altidor met with a major airline interested in expanding its operations to Haiti.

At a public event hosted by the Center for Strategic and International Studies, the Prime Minister spoke of the major strides Haiti is making in infrastructure development during the reconstruction phase and judicial reform. He also indicated that the government would hold legislative and local elections before the end of the year.