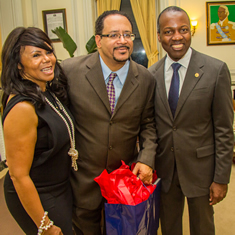 This past Saturday night, the Embassy of Haiti in Washington D.C. opened its doors to honor Dr. Michael Eric Dyson. In his remarks, Ambassador Altidor praised Dr. Dyson’s sense of community and courage and his influence as a thoughtful intellectual. Notable Washingtonians, including the Minority Leader of the U.S. House of Representatives Nancy Pelosi, were in attendance. Many of the guests, from media personalities, White House officials and business leaders to members of the academic community, were visiting the Embassy of Haiti for the first time.

Attendees admired important pieces of Haitian artwork on display at the Embassy. According to Ambassador Altidor, “This night is an opportunity to introduce the Washington community to Haiti’s rich culture.” Prominent Haitian masterpieces, such as the Ball at King Chistophe’s Court by St. Louis Blaise decorated the walls of the Embassy. In addition, guests were treated to savory Haitian dishes showcasing the island’s gastronomy.

In his comments, the Ambassador highlighted the power of connection as an important tool for Haiti’s diplomacy. “As a Government, we are taking a more creative approach to Haiti’s development process. Haiti is more than just the negative stories that are often covered in U.S. media.” The Ambassador encouraged the guests to travel to his country and discover a Haiti of rich culture, a vibrant art scene and hospitality that may be unknown to the audience. This event was one in a series being hosted by the Embassy of Haiti in Washington D.C. to further its objective of presenting Haiti in a positive light.