Video, Photos and Written Remarks: Ambassador Altidor at The Wilson Center Commemorating the Third Anniversary of the Earthquake in Haiti 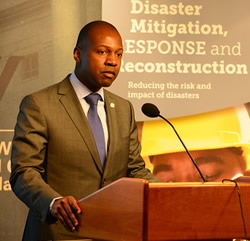 Ambassador Paul G. Altidor spoke at The Wilson Center January 10, 2013, at an event commemorating the third anniversary of the earthquake in Haiti. The event, “Recovery, Reconstruction and Renewal: What it Takes to Build Back Better in Haiti, was co-hosted by the comparative urban studies project and the Latin American Program of The Wilson Center and the Pan American Development Foundation.

I would like to thank The Wilson Center and PADF for hosting today’s event and providing me with the opportunity to discuss the recovery and reconstruction efforts in Haiti since the 2010 earthquake and share with you the Government of Haiti’s strategy to spur economic development and get development right.

As you are aware, more than 200,000 people perished on that day, leaving more than 1.5 million internally displaced. The earthquake further devastated the Haitian government, with the majority of government buildings destroyed. Contrary to some of the reports or storylines being repeated in the international press, Haiti has made tremendous progress in the last three years, both in terms of reconstruction and in terms of strengthening the Haitian state and its institutions.

With the democratic election of President Martelly in 2011, the country has been aggressively moving forward, determined to get development right.

We are beginning to see real change. Since President Martelly was sworn in, Haiti has made substantial progress in reducing the number of people displaced by the earthquake living in tents. There were nearly 1.5 million people living in 1,550 tent camps when President Martelly took office. The number of displaced Haitians is now less than 400,000 due to the implementation of the government’s relocation strategy. Gradually, the major public spaces are being vacated as 1,100 of the 1,500 camps have been closed. The government was able to reduce the number of people in the camps through a combination of rent subsidies, provision of new housing, rehabilitation and repair of damaged houses, and support encouraging individuals to return to their communities of origin. All of these actions are part of a long-term housing strategy put in place by the government. One of the key aspects of this strategy is that the Government of Haiti no longer seeks to build temporary shelters, but rather to build permanent housing. The government will continue to work with NGOs to ensure that this policy is followed.

The government also has made significant progress in removing the rubble and repairing the homes that were damaged during the 2010 earthquake. Between 60-70% of the debris has been removed and 300,000 houses have been repaired. To address housing constraints, the government has encouraged the move towards expanding high-density living with the introduction of mult-istory condos and apartments; and is working to provide financing for strengthening existing homes.

First, there was a lack of coordination between the international community’s efforts and that of the government. This resulted in a misallocation of resources and duplication of efforts.

Second, for too long, the nearly 10,000 NGOs operating in the country were not required to be accountable to the government or the Haitian people. With the majority of the assistance to Haiti going through these NGOs rather than the Haitian government, the Haitian state has remained in a weak state and the funds funneled to the country have not produced the desired results.

In an effort to address these first two points, the government has adopted a new donor coordination mechanism, which is designed to align the work of the NGOs operating in Haiti with the national development strategy and ensure that the NGOs coordinate their initiatives with the government rather than bypassing the government.

Third, only a fraction of the billions pledged by the international community has been delivered. The lack of funds has hampered and slowed the reconstruction process greatly.

Haiti is now at a crossroads for galvanizing its endowments and generating sustainable, long-term economic growth. There are multiple development efforts currently underway in Haiti aimed at spurring greater economic growth, including the ambitious development of major infrastructure and housing programs, the construction of two international airports, the focus on energy, the revitalization of the tourism sector, and the constructing of industrial parks such as Caracol in the north of the country to expand the country’s export base. The government is also actively focused on addressing investment promotion, directly tackling extreme poverty, increasing agricultural production, expanding school enrollment, and the empowerment of women.

These efforts have started to yield results. Some of the government’s key achievements, which merit highlighting include:

Before closing, I would also like to highlight one aspect of the development process that directly involves me as the Haitian Ambassador to the U.S. The centerpiece of Haiti’s foreign policy is what we refer to as “business diplomacy.” What it means is that our foreign missions and consulates are now re-oriented and empowered to serve as conduits for potential investors. Our diplomatic missions around the world now serve as instruments to attract foreign direct investment in Haiti, to encourage open markets for Haitian products and to support the interest of Haitian entrepreneurs and businesses.

I have spoken enough. As you can see, there has been progress in the reconstruction efforts. The government of Haiti is taking ownership of the country’s development agenda. Our intent is to get development right this time for Haiti and its people. We are working tirelessly to that end. Once again, thank you to the Woodrow Wilson Center for giving me the opportunity to address you.