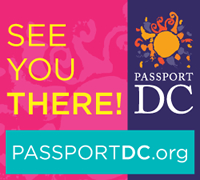 Almost 5,000 visitors took a mini-excursion to Haiti Saturday, May 4, 2013, when the Embassy of Haiti opened its doors for Passport DC’s “Around the World Embassy Tour.”

“We hope people saw some different aspects of Haitian culture during their visit,” said Ambassador Altidor.

Ebonie Davis came with five adults and 10 children to celebrate her daughter Lily’s 12th birthday. “We did the embassy tour as a family last year,” Davis said. “This year we turned it into her birthday party.”

Beth Jones was joined by her husband and his parents. “The music is great,” said Jones, who came to the Haitian Embassy first because she heard about the “great coffee.”

As they entered to cheerful greetings of “bonjour!” visitors followed their ears upstairs inside the Embassy to hear the eclectic sounds of the Haitian Rara band that spent the day entertaining. The vibrations of the drums, colorful horns, and unique instruments of the 13-member Brother High group reverberated throughout the four-story building as the artists performed.

There was no question for William Lee that Haiti would be his first Passport DC stop. One of his best friends who lives in New York is from Haiti. While at the Embassy, Lee texted his friend to say how “great it is.”

Courtney Kreer made sure she received a stamp in her souvenir passport. She shared how much she enjoyed her brief Haiti experience. “This is fantastic!” she said.

Jake Goldstein, who was there with three friends, said that when he tasted the Haitian coffee, it brought him back to four years ago when he was in Haiti. For Goldstein’s friend Rebekah Daniel, Haiti was the most exciting stop on their itinerary.